An objective for every apartment marketer is to deploy marketing strategies that aim to shorten the average number of days that occur between one resident moving out of a unit in their community, and another one moving in.

Marketing loses all of its effectiveness in shortening this time duration, though, if you're also letting all of your leases expire on the last day of the month. Here's two major reasons why:

To state the obvious, this approach means that you'll have multiple move-outs occuring on the same day. When this happens, you're not only facing an immediate vacancy crisis but also willfully increasing that number of days between residents for those units in your community.

Say, for example, you had 7 leases of the same floorplan expiring at the end of this month. Is it possible for your maintenance team or other vendors to properly turnover each of those units quickly enough so that you can begin showing them to prospective residents? The answer is most likely no. If it takes at least one day to make one unit ready for showings, then some will sit vacant and untouched for up to a week.

Not only does this result in an unnecessary amount of lost rent, but also requires you to spend more on marketing so that you're able to generate the traffic needed to get out of this crisis in less than 30 days.

That's not even guaranteed, either. Let's use the same scenario of having 7 leases of the same floorplan expiring together on the same day as an example. Even if you're able to rent one of those units every 5 days, that means the last unit of that group will have experienced 35 days of vacancy before an application is received. Cumulatively, you've accrued 140 days of vacancy between when a resident moves out and an application is received. As that doesn't even include the amount of days after application, which vary depending on both when new residents can move in and what your hold policy is, the total number of days vacant between residents for just this group of units is a significant setback for your apartment community. 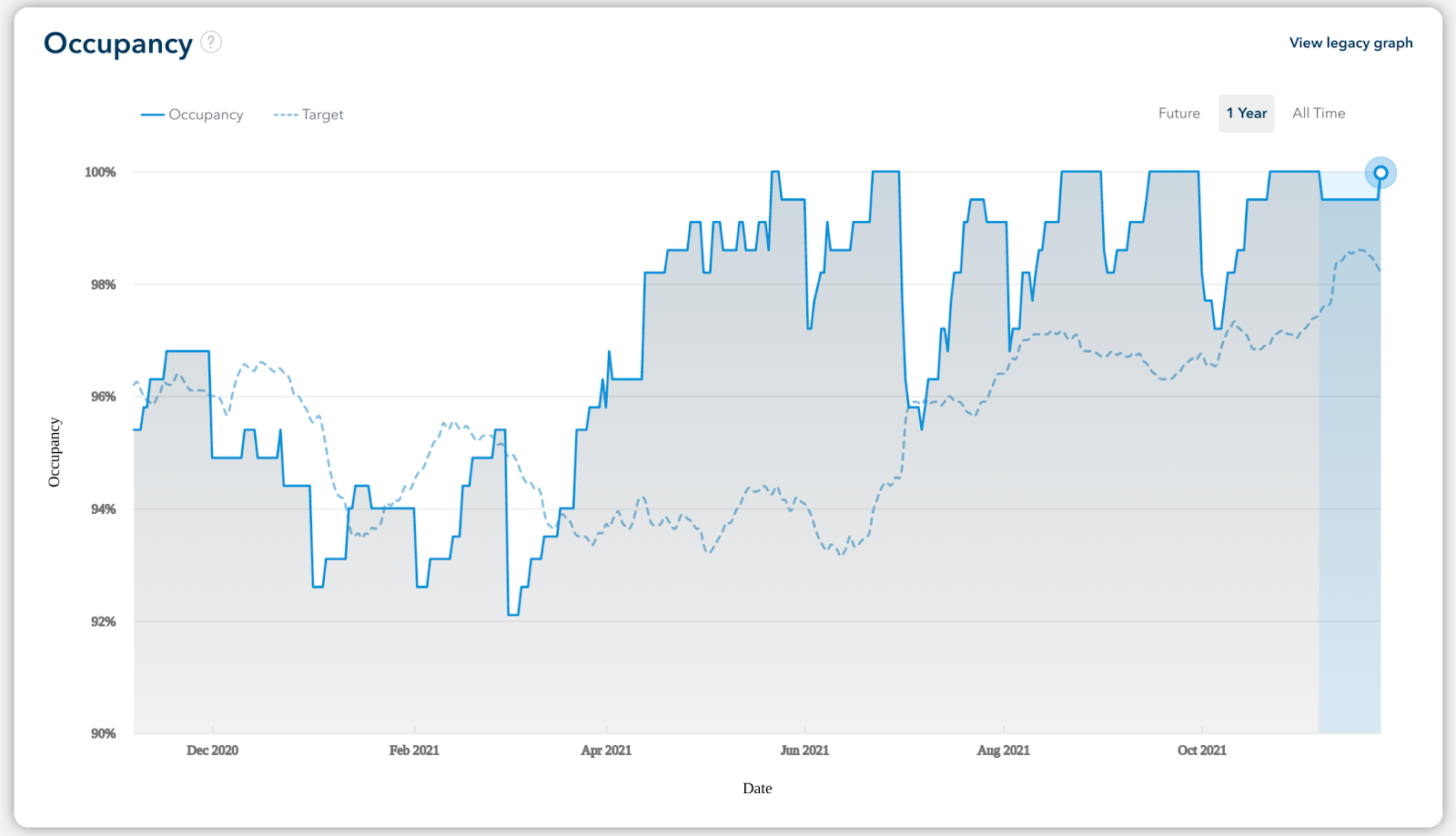 You can clearly see the steep drop-offs in occupancy at this particular apartment community according to its occupancy graph, which is a representation of what occurs when several leases expire simultaneously. This results in a 'stair step' pattern as they work to refill all of those units every month. The community's occupancy eventually reached stronger levels around April, but that was also around the time when it began to undercharge rent to new residents. That is one of the many financial sacrifices your community must be willing to give when you're letting leases expire on the last day of the month.

2. You'll never be able to lower your marketing spend and save money because occupancy will never be stable.

The next financial sacrifice, of course, is consistently having to operate with a marketing budget that's higher than necessary. Your leasing agents will require a steady stream of leads, regardless of your community's seasonality, because occupancy will constantly change.

This means that your apartment community will have to fund more digital advertising campaigns in Google or Facebook, as well as all other sources like Internet Listing Services, all the time because you need to generate traffic that accounts for the next series of move-outs set to occur the next month. There will never be a moment where you can truly feel safe dialing back on your ad spend.

If your apartment community has habitually let leases expire around the same time each month, there's two methods you can try to move away from this practice:

There's a variety of different tactics that could accomplish this. You could offer true 365-day lease terms to new residents and have just one unit move-out at a time, which would help you avoid excessive vacancy and begin shortening that average number of days between residents immediately.

You could also offer new residents lease terms anywhere between 11 ½ to 12 ½ months in length, and have all of those leases end on a Sunday. Now, this may sound counterintuitive to the whole emphasis of this blog, but here's what we mean: suppose you offer a 12-month lease that is set to begin on December 1, 2022. If you were to apply this method, that means you can set one of four different lease expiration dates—either of the two Sundays before December 1, 2023 (11/19, 11/26), or the two Sundays after (12/3, 12/10). This approach works because you have the power to choose which of those dates has the least amount of leases expiring, which gives your maintenance team the chance to start turning over that unit first thing on Monday and make it ready for showings faster. Additionally, this is considerate of residents because it allows them to conduct their move-outs over the weekend.

Our video below offers more insight into how to effectively spread apart leases:

Video: How To Optimize Lease Expirations

2. Develop a renewals strategy that positions your community to have more leases expire during seasons when your apartments are in high demand.

In order to become a dynamic apartment marketer, you need to have an acute understanding of your seasonality. With this knowledge, you can map out how many leases you'd want to expire each month and protect yourself from having a stack of vacancies from occurring at the worst time of year. When you control when your leases are expiring, you can better navigate changes in demand by increasing your marketing budget to generate the right amount of demand at the right time, and then be enabled to save money when occupancy is under control.

This is where renewals can come in. By sending lease offers to current residents who wish to stay longer at your community, you can be strategic and choose an expiration date that is better for you. For example, if there's a lease coming due in December, a tough time of the year for nearly every apartment community, you may not want to offer another 12-month term because you know you're only delaying a potential vacancy problem down the road. Instead, you may choose to offer 3 or 6 month terms, where the lease expires closer to your busy leasing season, when you know it'll be much easier to occupy that unit again.

This tactic is explored more within our latest whitepaper, Renewal Strategies For Apartment Communities, which you can download for free by completing the form below.