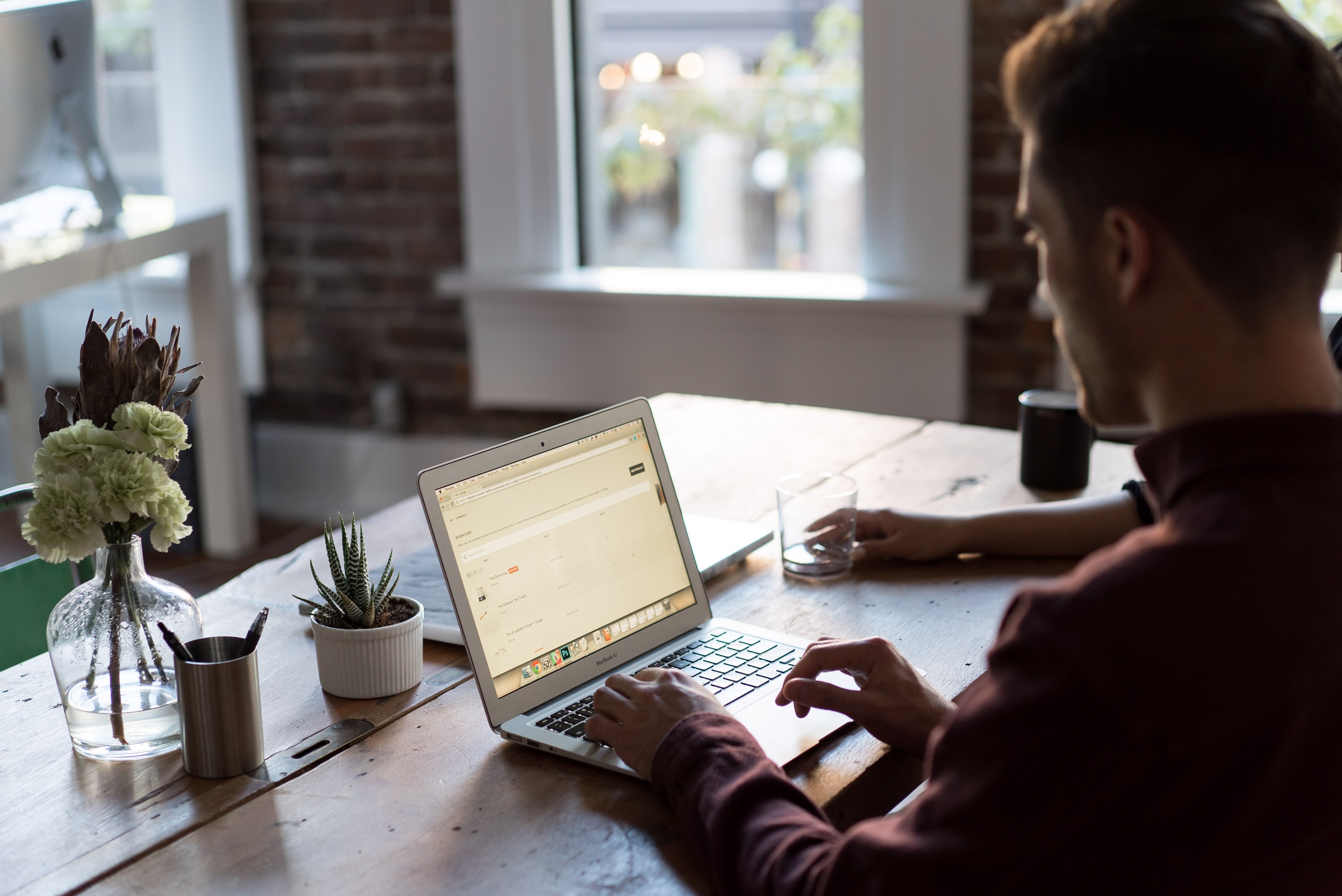 In this blog post we want to provide a brief introductory post intended to help apartment marketers better understand what Google Ads is and how it works.

What is Google Ads?

Google Ads is Google's tool for managing and displaying advertisements on the search engine result page of most Google search results. With Ads, Google is able to monetize the primary service they offer their users—their search engine.

Here's how it works. When someone searches for something on Google, a page like this pops up: 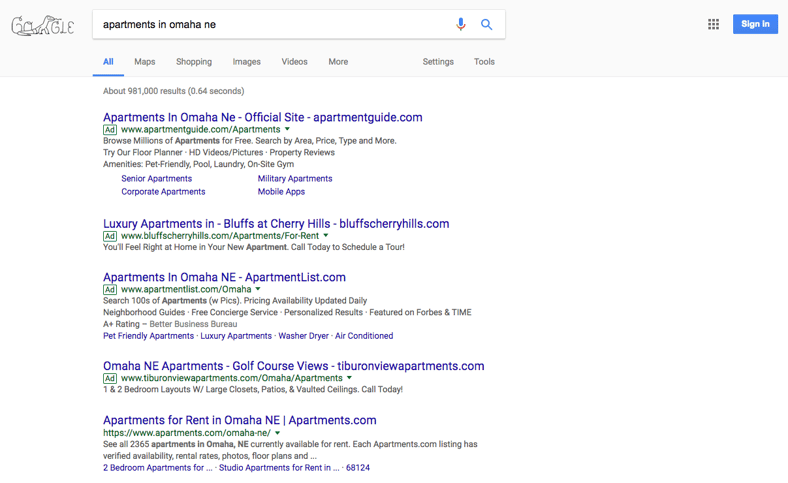 Note the small green "Ad" button on the left side of the top four results on the page. Those are paid search ads. In each case, an individual or business has set up an ad on Google that is triggered by the terms a Google user searches for.

How does Google Ads work?

Intuitively you might first think that Google simply gives top placement to the people who spend the most on their ads. At first glance that might make sense, but actually that is not how Ads work.

This is why: If Google just said "we'll give the best placement to the highest bidder," that would eventually turn Ads into a thing dominated entirely by huge corporations who can afford large advertising budgets.

The trouble with that is two-fold:

In other words, a straight auction model would reduce competition amongst advertisers and trust amongst Google's users. It's a deadly combination for Google's revenue stream.

To solve the problem, Google invented a metric called "quality score." Quality score works like this:

Google looks at the search term the ad is targeting as well as a variety of traits with the ad itself (ad copy, use of extensions, keyword match type, landing page, etc.) and assigns a score to the ad based on how relevant they believe the ad is to someone searching the keyword the ad is targeting.

Google then runs a simple calculation:

The ad with the highest AdRank will get top placement. Note how heavily this formula skews things to favor relevant ads. Google is very interested in making sure that relevant ads outperform ads that simply have enormous bids. This graphic from online advertising firm WordStream explains how the system works and how Google determines the cost of a single click:

How can I tell what is an ad?

Good question. Here is the screen capture we shared above:

In the example above, the ad is indicated by that small green rectangle with the word "Ad" in the middle in green font. It's subtle, but it's there.

Why has Google changed the way they identify ads? We'll get into that more in a subsequent section of the post, but the short answer is that the same thing that causes us to "not see" a billboard that we drive past every day on our way to work also affects our ability to "see" ads on the Google search result page.

Due to the enormous number of ads that hit us every day, we don't trust ads and become very good at ignoring them. To counter that Google has to make their ads more subtle so that we don't realize we're clicking an ad rather than an organically generated search result.

How does Google determine when an ad is displayed?

Ads in Google Ads are based on the keywords or search terms used by Google's human users.

If you are an apartment community in Lee's Summit, MO, you might consider buying an ad for the term "apartments in Lee's Summit." But things quickly will become very complicated for several reasons.

First, highly competitive keywords are harder to rank for and generally cost far more to advertise on. This is just simple economics, of course. If 100 apartment communities all want to advertise on "apartments in Lee's Summit" then it will be harder to be the one advertiser that is at the top of the page when someone enters that search term and it will cost you more money to get there.

Second, keywords on Google are used in many different ways. For example, let's say you have an apartment community in Albuquerque, NM. You want to reach anyone shopping for apartments in your area. Even in a relatively smaller metro with no other notable cities sharing the name, there is actually a lot of ambiguity around the search terms.

In addition to all those additional search terms with the same intent--to find an apartment in Albuquerque--there are many more specific searches--"albuquerque apartments for rent utilities included," and "studio apartments albuquerque" both receive hundreds of searches for month.

When do you want your ad to appear, given all that variation in how people search?

Google helps their users answer that question through what they call "match types." Match types tell Google if you want your ad to show up anytime someone enters a search that includes the words "apartments" and "albuquerque" or if you only want it to show up for a very specific search such as "studio apartments albuquerque nm."

There are four main match types you choose from when setting up an ad.

With these various match types, you can structure ad campaigns and bidding strategies that allow you to narrow your advertising focus or to make it very broad. It is one of the things that makes Google Ads a unique advertising platform because you are given so much control over the details of how your ad is triggered.

In one sense this is a tricky question to answer. With online marketing you don't really want to guarantee results because every situation is different and flexibility and adaptability are extremely important for any good online marketer.

That said, there is a simple way to answer the question: Google made $79.38 billion from ads in 2016. If Ads didn't work for advertisers, why did those same advertisers pay Google almost $80b last year? If Ads didn't work on some level, it would not produce that kind of revenue for Google.

What this means is that if you have tried Ads in the past, been unhappy with the results, and then abandoned the service... you might want to reconsider that. To be sure, Google does make it easy to spend money on Ads, but if they only did that without any concern for making sure Ads is also effective for their advertisers they wouldn't be making $80b a year in ad revenue.

How has Google Ads changed over the years?

We already briefly mentioned the point about how Google labels advertisements. That's been one of the big changes. But there have been others.

Basically, a good rule of thumb is to remember that ads are Google's primary revenue stream and so they are a) extremely protective of them to make sure that they continue to be clicked by users, and b) always looking for new ways to display more ads on their various web properties.

How should apartment marketers use Ads?

The most important thing for apartment marketers to understand about Ads is that it is fundamentally different from traditional mass-messaging forms of advertising.

Many marketers look at Ads and mentally equate the search results page on a keyword like "apartments in seattle" with "a billboard on the side of a busy stretch of interstate." The trouble with that strategy is two-fold. First, getting top placement on a search term like that consistently is going to cost you a ton of money—more than a billboard, almost certainly. Second, the platform can be put to far better uses if you take the time to develop a better strategy. (If you want to learn more about why targeting "apartments in seattle" or some similar keyword is bad, we have written an entire post about that issue that will give you more information.)

Here is what a better Ads strategy looks like: Because Ads allows you to target any keyword you can think of, there are tons of examples of relatively low-hanging fruit that provide real value at a fraction of the cost of those highly competitive, high-frequency search terms.

Start with your community's name. This is a little counter-intuitive, but it's powerful. By setting up an ad to appear when someone searches for your community by name, you are accomplishing a few different things:

And here's the best part: An ad pointing to the website for "Brookside Apartments at Fallbrook" is, obviously, extremely relevant to someone searching for 'brookside apartments' on Google. So the quality score of the ad will be very high which makes the cost of the ad very low.

Are there other features apartment marketers can use to help their ads stand out?

There are! Obviously all the ads are based on the same basic ad design template, but within that template there is room for customization, primarily thanks to a feature called ad extensions.

Ad extensions are additional features that can be attached to an ad that allow you to bring in more information or graphic components to the ad. Extensions can allow you to do a variety of things:

Significantly, the use of extensions also functions as a kind of tie-breaker in the event of a tie on AdRank. In that case, if one ad uses extensions and one does not, the one that uses extensions will likely be placed higher.

Should I use Ads to market my apartment community?

Well, this is a hard question to answer in a general sense. If you have an extremely tight budget and don't yet have things like a community website or high-quality photo and video content, you'll need to think through what to prioritize when deciding how to use that marketing budget.

Also, if you are a section 8 property that is consistently at 100% occupancy and does minimal marketing, you probably don't need to use Ads consistently, though it may be something to consider if you ever hit a leasing drought.

That said, for the vast majority of conventional properties and certainly for most luxury properties, it will make a ton of sense to use Ads to advertise your community. There simply isn't another advertising source out there that combines the precision and affordability of Google's advertising platform.