How To Maintain An Ethical Approach When Editing Apartment Photos

The photos featured on an apartment's website, Internet Listing Service pages, or digital advertisements play a critical role in both attracting prospective residents and influencing their decision to live in that particular community. Naturally, apartment marketers can be a little self-conscious about featuring their apartments online knowing they will be compared with competing properties. They want their communities to win out and can spend a great deal of their time scrutinizing the appearance of their communities in media content.

The members of RentVision's in-house media team know this. They hear from clients daily who request edits for various photos of their apartments. The team does its best to edit photos so that they will represent an apartment community on its best day.

However,  there is a line between what can be edited, and what should be edited. Edits to apartment photos should never create a false representation of an apartment community. It is not only deceiving to prospective residents, but also a poor business practice.

In this blog, we will provide an overview for how to maintain an ethical approach when editing your apartment community's photos so that they're both accurate and appealing.

Rule No. 1: Don't Compete Against Yourself.

Consistently overcorrecting your photos will, in the long run, hurt more than help you. When a prospective resident visits your apartment community and discovers that it doesn't look how it did online, it may create a negative reaction that causes them to pursue other communities instead.

Displaying photos of your apartments online is meant for informational purposes only. If you're trying to woo prospects with aesthetically-pleasing images that don't factually depict the appearance of your apartments, you're ultimately competing against yourself because you're hoping visitors won't notice the difference.

The goal should be to look best for those individuals actually wanting to rent one of your apartments, so that they're able to get all the information they need when viewing photos of them online.

The light pole next to your clubhouse may look awkward, but it's there. The area near your community may not look as nice as you'd like it to be, but that's where you're located.

The point is that you should never edit or remove permanent fixtures out of your photos just because you don't like that they're there. Making such an edit is misleading and inaccurate. If it’s permanent on the property, it should remain in the photo.

Rule No. 3: If It Can Be Cleaned, It Can Be Photoshopped.

There are plenty of scenarios where an ethical edit can be made to a photo of your apartments. One in particular could be that the unit featured has a stain on the carpet that was scheduled to be cleaned, but wasn't done prior to the day the photo was taken. In this scenario, editing out the stain would create a more appealing and more accurate representation of the unit.

Let's use examples of both exterior and interior photos of an apartment community to show how these three rules of thumb were applied while making edits. 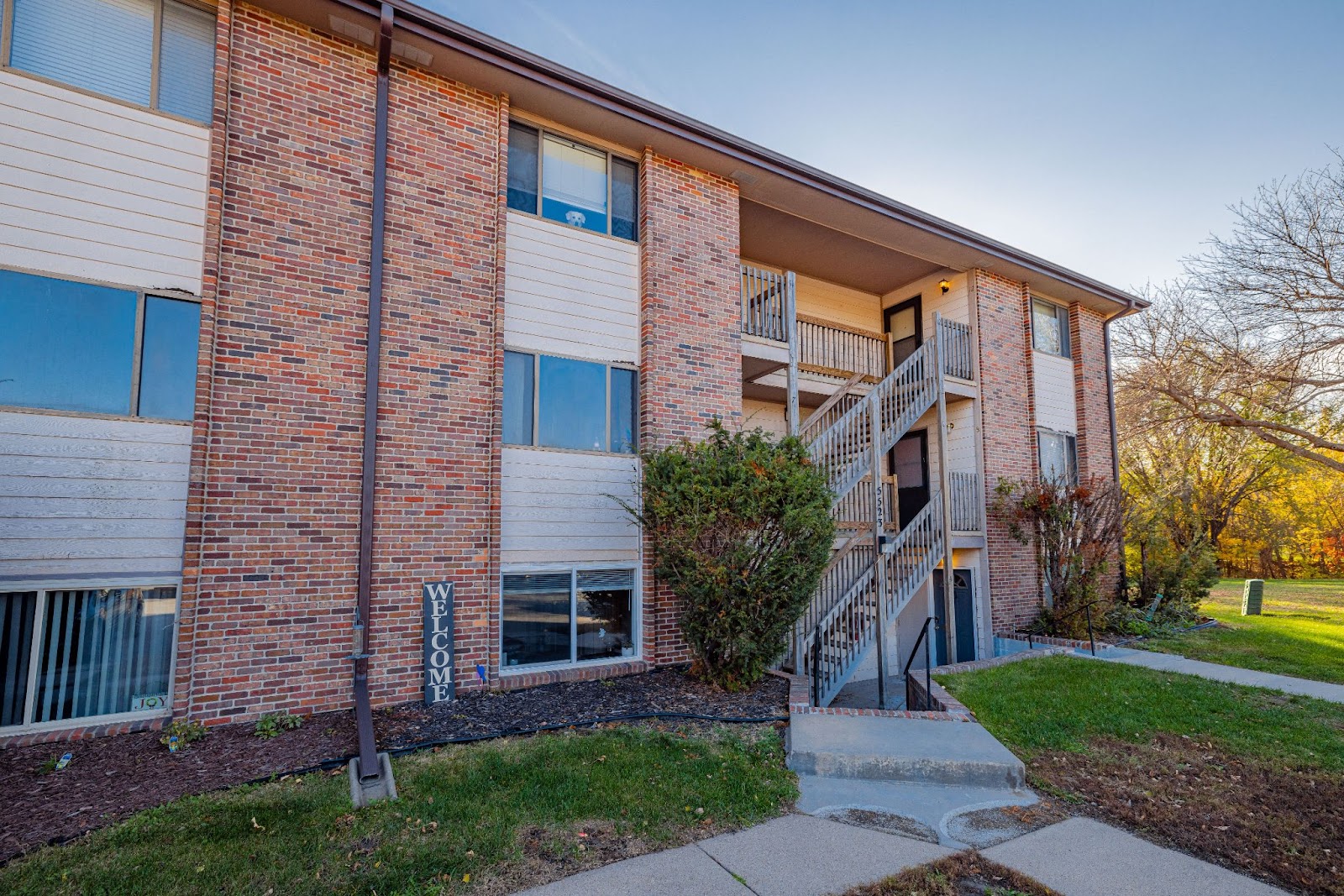 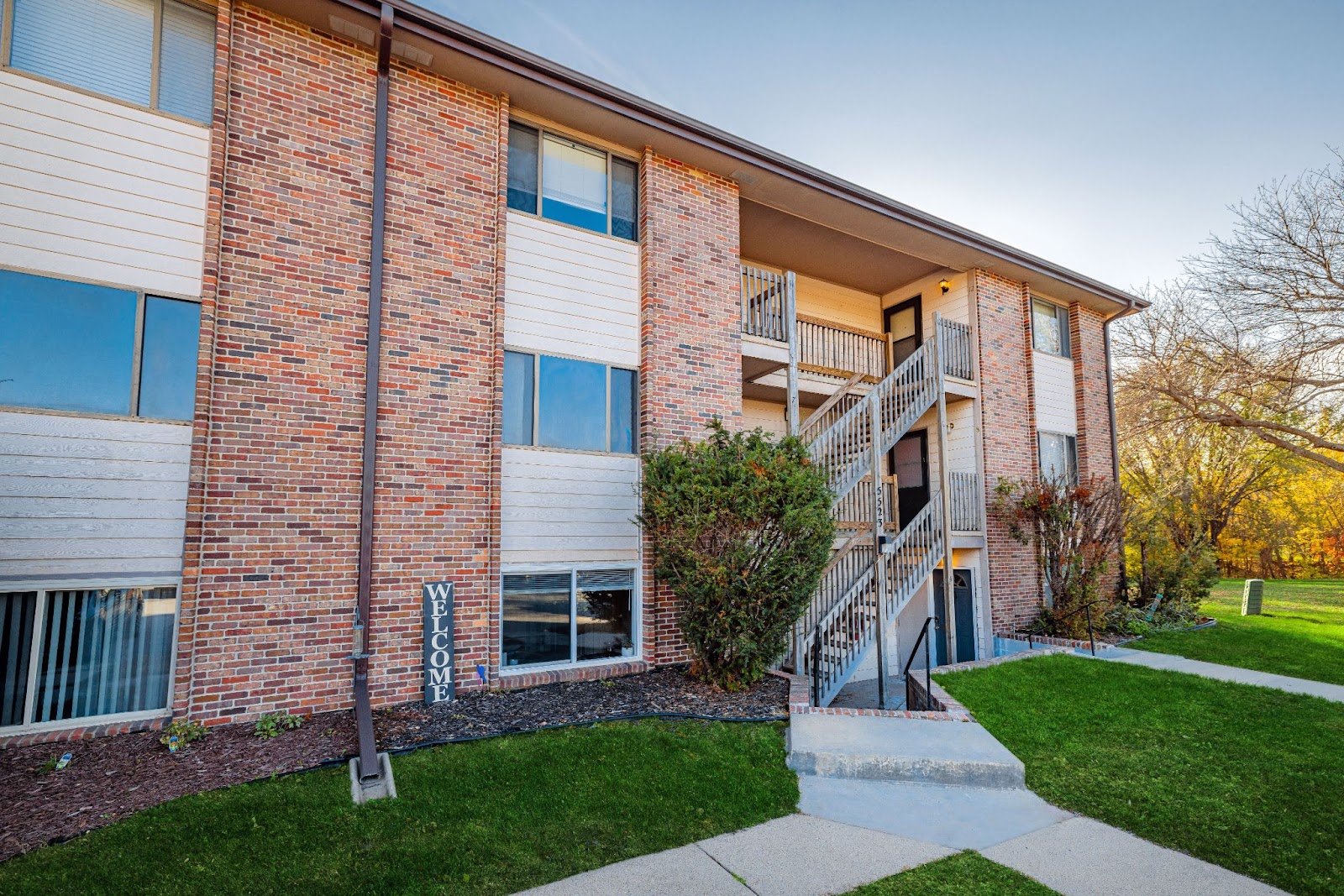 There were some ethical edits made from the first photo to second. (Can you spot them?!) Here's a further breakdown of those changes and why they are in line with our standards:

It's okay to have the dog in the upper story window removed from the picture because the dog is not a permanent fixture, and may be a distraction. (He's still a good boy.)

Same as with the dog in the photo, it's okay to edit and remove any window or door signage and decorations, as those aren't permanent fixtures.

3. Edited the concrete sidewalk and paint above the window only because we had confirmation from property that maintenance vendors were scheduled to fix both.

Without confirmation from the property manager that these maintenance issues were scheduled to be fixed, these edits wouldn't be ethical. This is a very important distinction to remember if you are facing a similar situation where there are visible instances of deferred maintenance. Simply photoshopping these issues away is purposefully misleading prospective residents.

If there are numerous issues like this in your apartment community, a better option may be to reschedule your photoshoot with your marketing vendor for a date after the maintenance is completed. That would, ultimately, provide the most accurate depiction of your apartments rather than relying on extensive editing to achieve a similar look.

Before moving on to an interior shot example, other types of edits to exterior photos that are acceptable by ethical standards include changing the sky or replacing the grass. This is actually a service we provide for our own clients, if they so wish.

You may have noticed the grass edits above. Most apartment communities take good care of their grounds, but there may be a few brown spots here or there depending on what time of year the photoshoot was scheduled. That being said, it's best that our team still knows in advance that those grounds issues would be addressed before making edits.

We've also edited the sky in the image below by adding clouds to give the appearance as if it was photographed at sunset, creating a visceral scene that 'pops' on an apartment community's website homepage. This is another example of using editing to improve the appeal of the property without actually changing any of the permanent features of it.

Exterior Photo At Sunset (After) 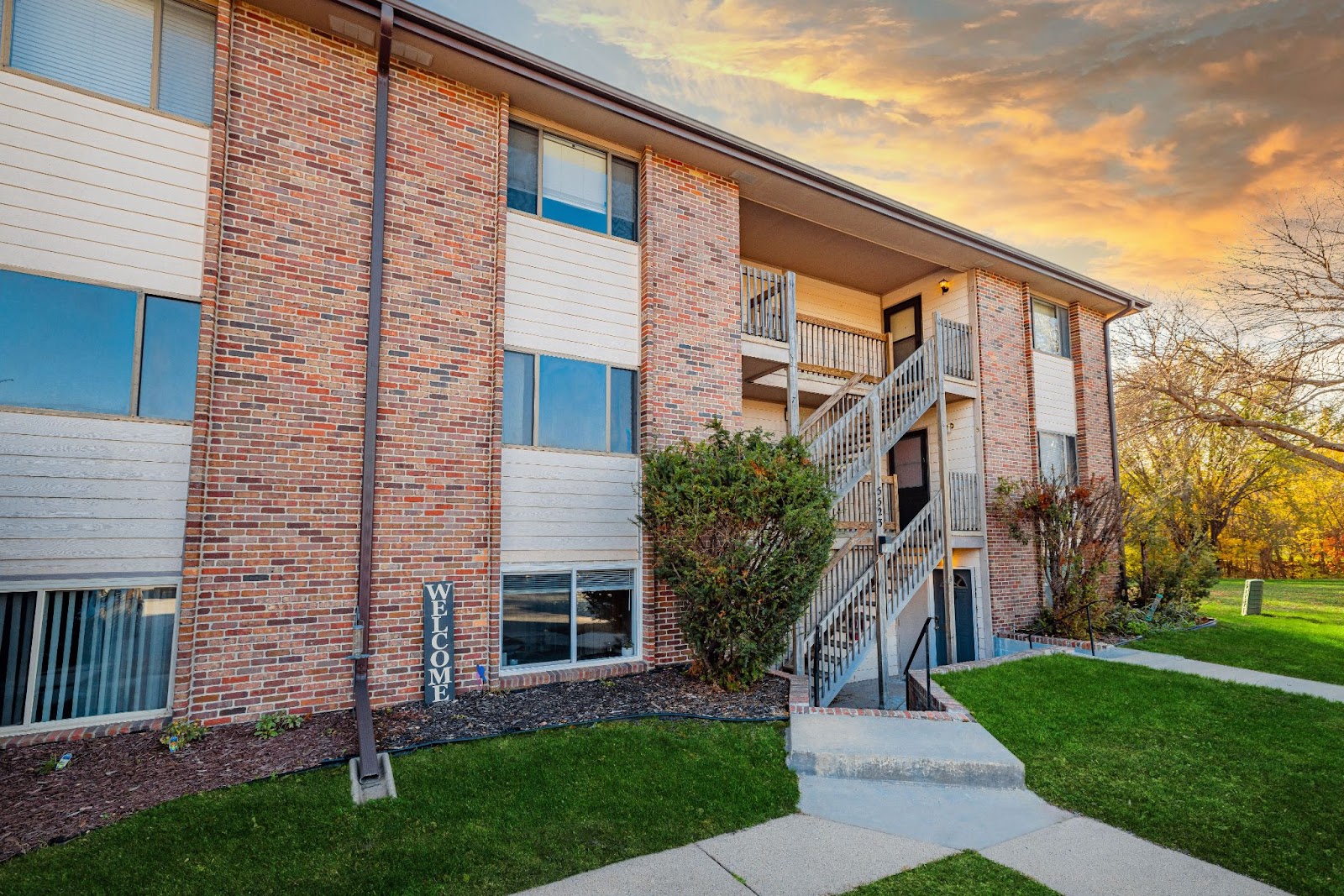 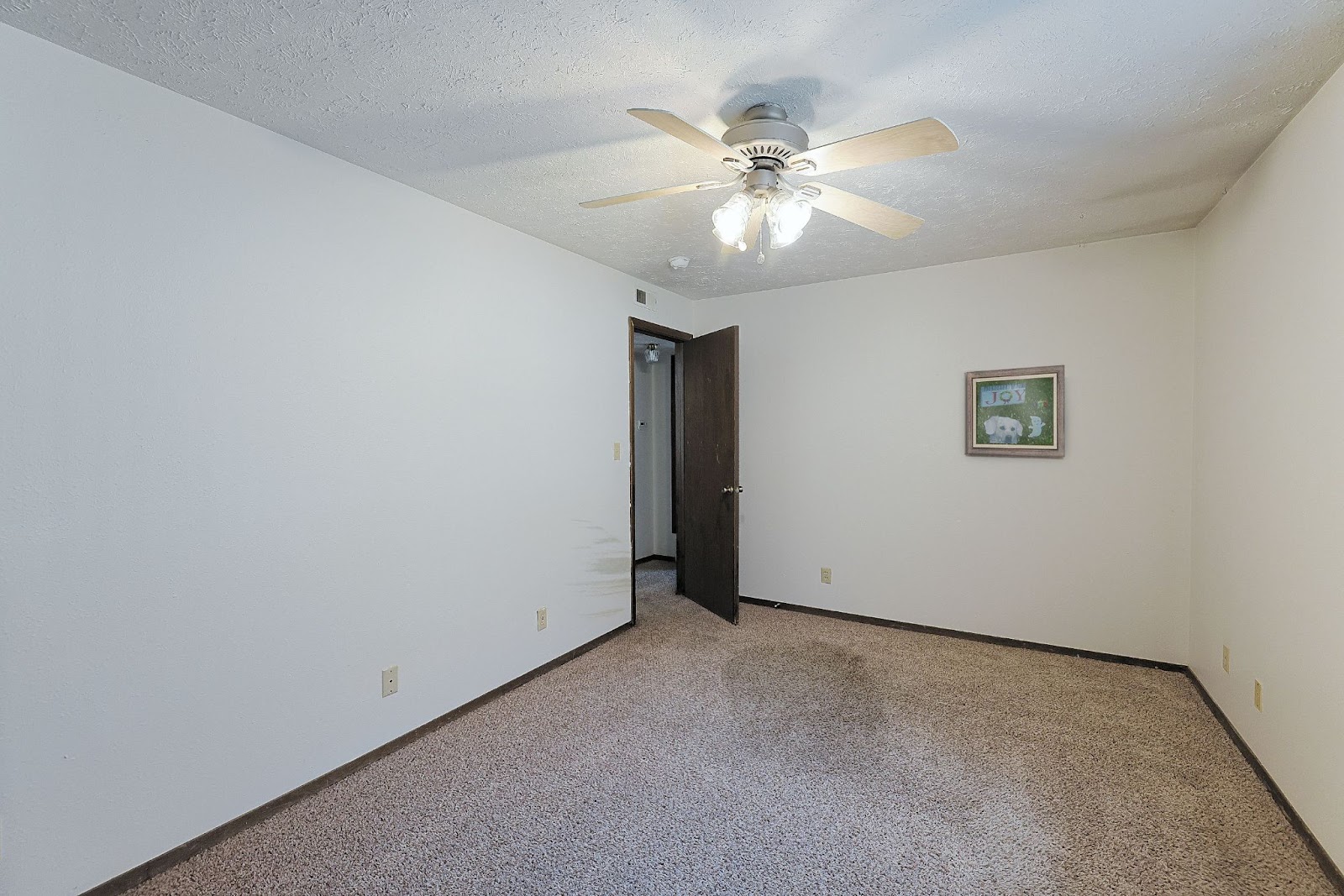 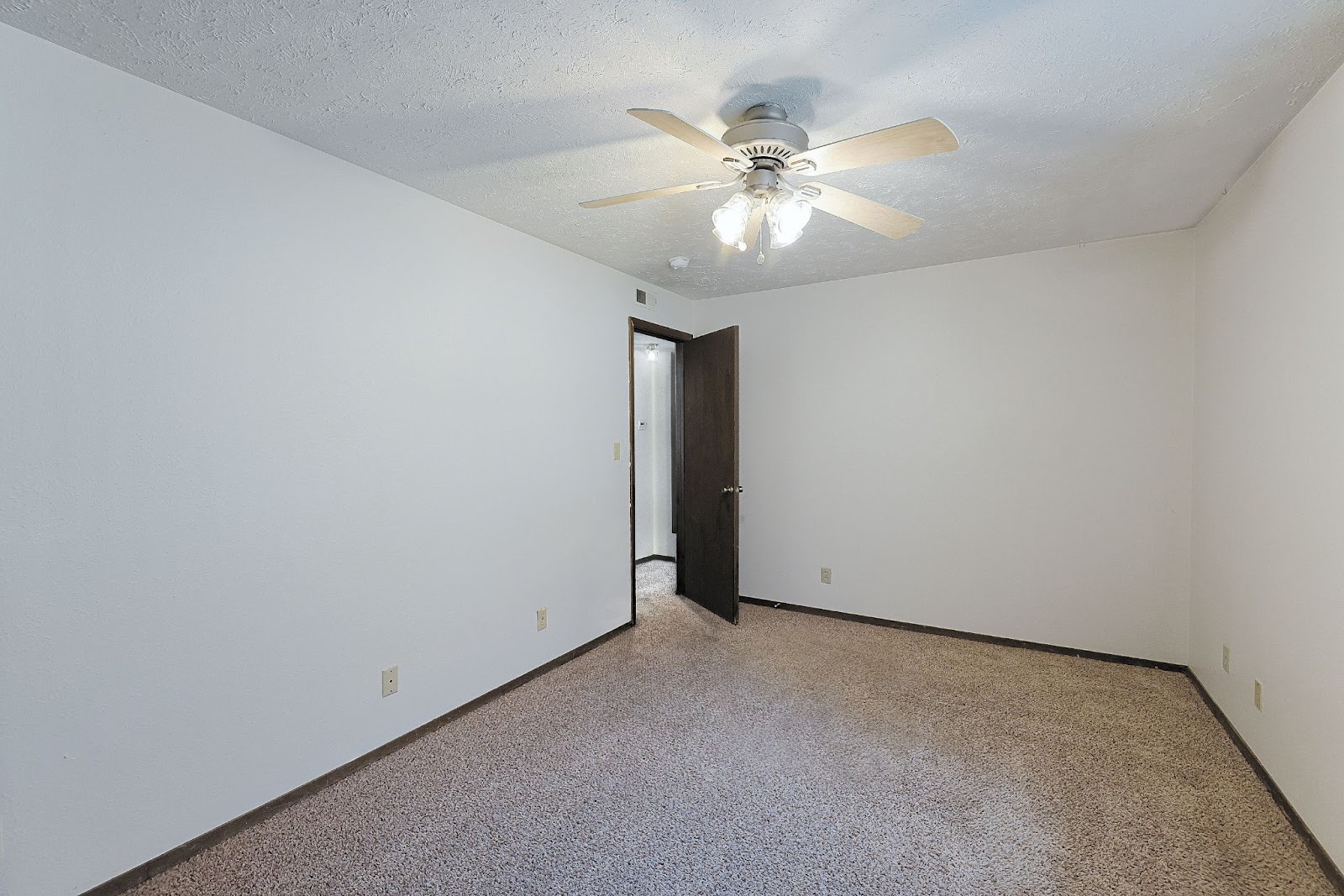 The rules of thumb applied to an exterior photo slightly vary when it comes to interior apartment photos. One key difference with interior images is that they are usually photographed in one particular unit for each of your individual floorplans.

1. Cleaned up stains on the carpets and walls.

In this specific instance, there is a visible stain in the carpet as well as the wall. Regardless of whether or not those things were planned to be cleaned, our editors can still remove those stains in Photoshop because not every unit of this floorplan type will have those exact same issues. The goal with interior photos is to create a uniform representation of each floorplan, so minor imperfections like the stains in this specific unit can be removed. (That being said, these stains should be cleaned anyway.)

(Notice our friends in the art photo?!)

In these two instances, we removed these things from the image because neither are permanent fixtures of all of the units in this floorplan. They may have represented things left behind by previous residents. Here is another example of making ethical edits in the pursuit of creating a general representation of an individual floorplan.

It's likely you may not have noticed this edit on first glance, but this is an example of enhancement our editors can make to a photo that doesn't mislead prospective residents. Adding artificial light in the hallway results in a more inviting feel to the interior photo of the bedroom, and also adds depth to the photo, too. Making this type of edit—one that doesn't remove any permanent fixture of the unit—is similar to adding a sunset feature in the exterior photo above.

In contrast, if a request was put in to remove the vent above the door because it looks awkward or unappealing, that would be declined. Even if it seems to be something minor that someone touring the unit would never notice, that is still crossing the line of what's ethical to edit, and what's not.

Your apartment community's media content plays a pivotal role in your marketing efforts, but it should never be used to mislead prospective residents. Our mission at RentVision is to make renting your apartments easy, and the best way of doing that is giving the prospects actually interested in your apartments the very best and most accurate depiction of your units and amenities online so that they can confidently make the decision to sign a lease.

Hopefully the examples we showed within this blog provide a framework for understanding what's ethical to edit with your photos so that you're adding to the appeal of your apartments without creating a false representation of them.